Flavors of the Avenue (Philadelphia, PA)

It’s been a few days since Flavors of the Avenue and I am still trying to wrap my head around everything that happened that day. Like any food event, there were highs and lows. It may not have been as seamlessly put together as Cured & Crafted, but it was still an incredibly enjoyable experience. For anyone who loves the restaurants along East Passyunk or wants to discover the multitude of places around this area, this event was a great way to experience tons of different food, and if it is held again next year, I would certainly encourage purchasing tickets. I went alone and was only armed with my ticket and iPhone, and I had a blast.

My favorite bite of the day came from Noord, a restaurant that I am shocked to not hear about all the time. Unlike some of the other spots, Noord was producing their food on location, which meant that there was a bit of a wait at times. However, I would have waited much longer than a few minutes to try the Bitterballen they made.

This braised beef meatball was so warm, flavorful, and tender that I wanted to crawl inside and live off of it forever. The tangy mustard that came with it only made this perfectly crisp bite even more intense. What really made me happy was that, unlike some of the other stands, the two adorable owners of Noord were chatting with people and really showing how important this community was to them. It made the food all that more special, and left me wanting to come back throughout the rest of the day (which I may or may not have done).

Another bite of note was Luke Palladino‘s Lamb Polpetta. My love affair with Palladino’s food first got started back at Cured & Crafted when he blew me away with his prosciutto topped with Burrata cheese and caviar, but I was still afraid that his contribution to Flavors of the Avenue wouldn’t live up to the high standards my heart put on him. Thankfully, I was just being paranoid and this bite was every bit as good as my previous Palladino experience. This little lamb meatball was lightly fried and topped with salty Parmesan and powerful, herby pesto. Luckily the toppings only complimented the flavors of the lamb and didn’t mask any of the great game taste of it. If people weren’t excited for Palladino’s to open up in November after trying this, then they’re out of touch with the reality of his food.

The most surprising taste that I fell in love with was the one from Will BYOB. I have always considered myself in a firm anti-gazpacho camp because while I am open to the idea of cold soup, I have yet to come across one that really pleases my palate. However, all that changed with the first spoonful of the Pea Gazpacho that Will lovingly offered up. The bright green soup was beautiful to look at, and the delicate flavors burst on your mouth when you realized that red grapes, rhubarb, and almonds were all to be found in each little serving. There was a great fruity, tart element to it all with this, and the almond added just a hint of of crunch to the soup. Will hit everything one should look for in a plate: color, flavor, and texture, and I am ashamed that I haven’t been able to eat there yet.

Of course, while there were some phenomenal, mind-blowing entries, there were also a handful of underwhelming ones. One of my least favorites was Garage‘s Grilled Cheese. Now, I love grilled cheese just as much as the next gal, but there was nothing great about this one. If you’re going to go simple, that’s fine, and it can actually end up being better than offerings that include dozens of bells and whistles, but you have to do it perfectly. I don’t know about everyone else, but my mom still makes the best grilled cheese in the world, so in order for me to enjoy this one I needed more than a slice of white American between two slices of white bread. I think the entry made a lot of sense for a place that is more beer-focused than food obsessed and, as far as I know, still has their BYO cheesesteak policy in place, but I just wish there was something more to it.

One surprising disappointment was Laurel. It seems like ever since Laurel opened up Nicholas Elmi can do no wrong, but I was not impressed with his self-described “White Person’s Banh Mi.” This pork pate topped with kimchi was delicious and packed a punch on its own. The pate was smooth and creamy while the kimchi had a tang to it that worked with the pork so that each complimented the other. The flavors were fun, strong, and appropriate for spring, so you may be wondering why I called it a disappointment. The thing that killed it for me were the huge hot dog rolls it was served on.

The plating wasn’t consistent, and one person would grab a bite with a nice pate to roll ratio, while others were forced to pick up pieces where the yummy flavors were drowned out by the processed bread. This event was swarming with people, so I guess I can’t fault Laurel too much for any missteps in execution, especially since all of the other elements were on point. Either way, I’m still jonesing to check out the restaurant if I can ever master the reservation system, so the bite didn’t sway me too negatively. 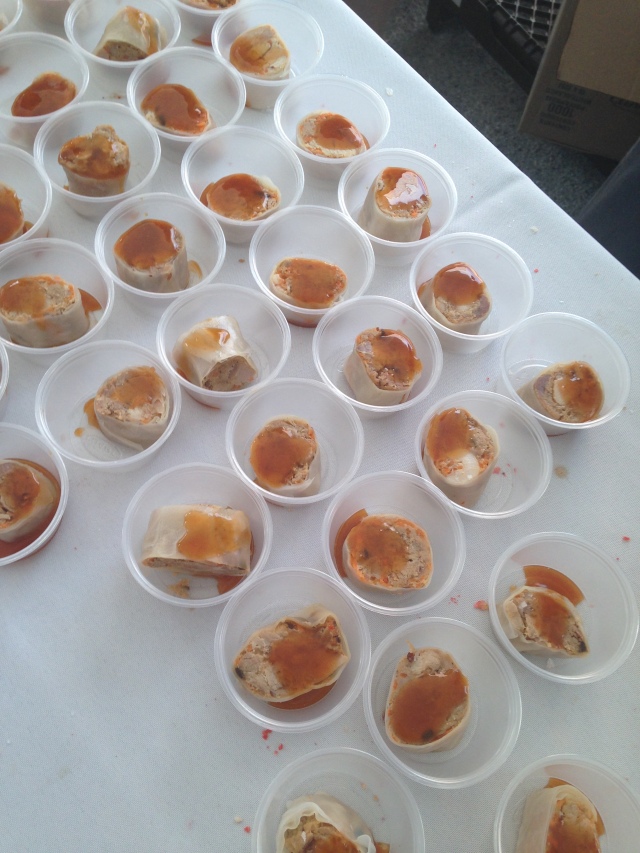 Overall, this food event was great, and for General Admission tickets at 30 bucks a pop, it was a steal. So, while I wasn’t bowing down to every restaurant, I was in no way upset with my choice to go to Flavors of the Avenue. There were tons of great offerings that I didn’t have time to explain here unless you all wanted to read a 20-page thesis on the event. However, I will say that I also loved Fond‘s Chicken Liver Mousse and Le Virtu‘s Porchetta, while the Vegetarian Wings in Jerk Sauce from Lucky 13 confused me a bit, and the Pork Summer Roll from Stateside was not a bite that I would go back for. 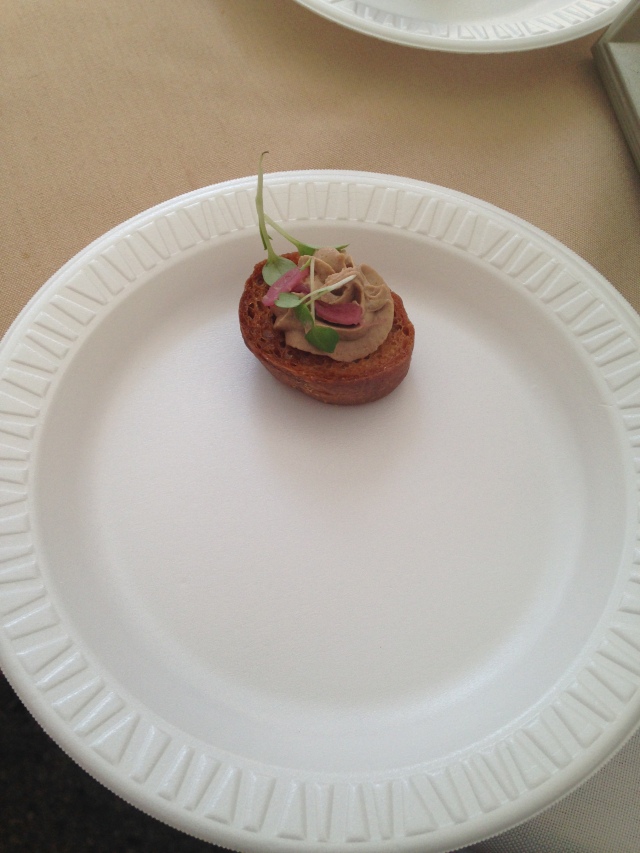 Despite my opinions on each individual place, I left Flavors of the Avenue content, stuffed, and wishing I lived down the street from most of these restaurants. Despite a crowded tent and long booze lines, the event was a hit. Next up on my event list is the South Street Spring Festival this weekend, and then, if I’m super lucky, the Cochon 555 event going on at the end of May.

Ratings for my faves:

Ratings for others I mentioned: