My posts in February were few and far between compared to January, but now that it’s March, I’m hoping to get back on schedule! First up, a review of a location at which I dined while visiting my aunt and uncle in Virginia. We ended up trying the new Kapnos Taverna, a restaurant I later learned is owned by Top Chef alum Mike Isabella. 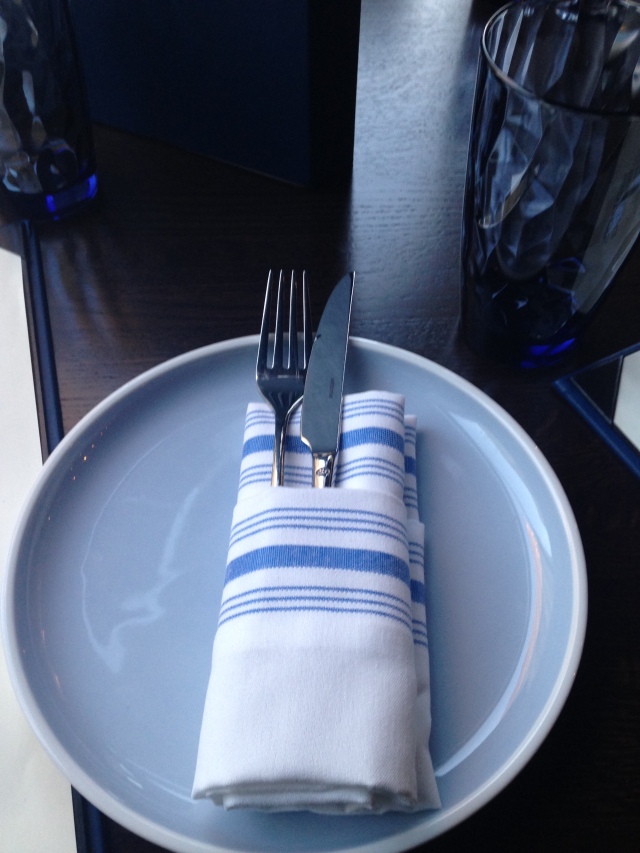 Decorated simply in a palette of blues and grays, the restaurant gave off an air of being calm, open, and large. Seated in the bar area, our waiter was fairly hands-off yet still thorough and willing to answer any questions we had. I don’t need to be coddled throughout my meal, so this worked perfectly for me. Of the two drinks I tried that evening, the one that I adored was The Shepherd, an herbaceous gin cocktail that featured oregano and tart lemon juice. It was a cocktail made for me. I do know some crazies don’t enjoy gin though, and the vodka-based Sunset Spritz was also good, particularly for those who love citrus. The thought put into the cocktail list was impressive and there was something for everyone on there, which should be the basic standard for any restaurant crafting a decent drink list. 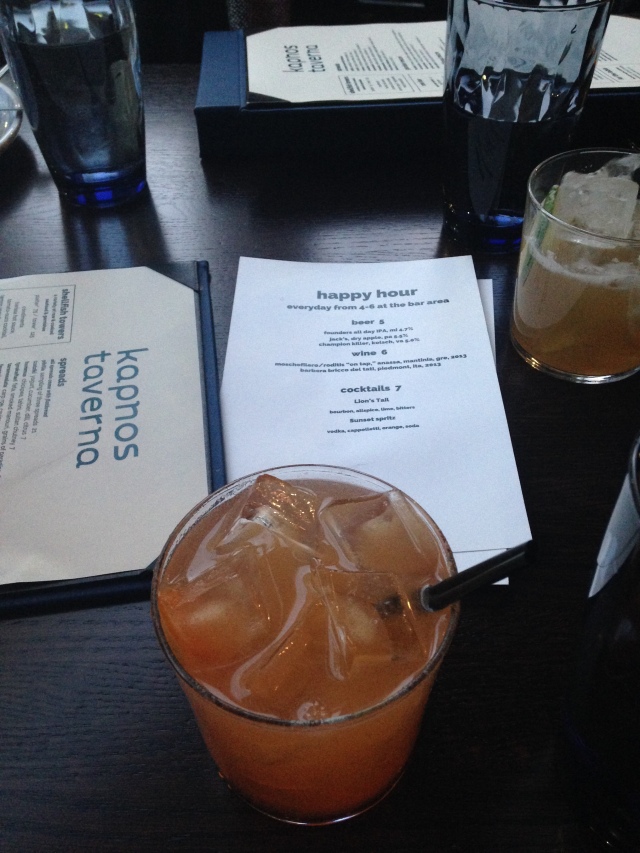 These cocktails were a solid way to begin the evening, but before long, plate after plate of food came out. The Roasted Crimini Mushrooms were easily the best thing we tried that night. Featuring a hefty serving of garlic and a zing of lemon, the mushrooms were the star of the evening. These plump veggies packed a lot of flavor, but certainly weren’t enough to keep us satisfied. On the freezing Sunday out, the Cheese Saganaki was what hit the spot. Bubbling, salty, and balanced out by a touch of honey, I couldn’t get enough of this stuff. We quickly devoured everything on the hot skillet, picking it all up with the feather-light flatbread. I’m sure I wasn’t the only one at the table who burned my tongue due to impatience.

Another dish of note was the meaty Spit-Roasted Lamb, a tender, succulent option that was served with tzatziki and a surprisingly spicy red chili sauce. For those who can’t take the heat, the Jumbo Shrimp Cocktail was a lightly-dressed option that boasted of both subtlety and lingering flavor. If you’re like me and really enjoy tasting the seafood, I’d say to leave the cocktail sauce untouched and relish in the flavor of the shrimp. Much like the cocktail list, there was a little something for everyone on the menu. All of these choices were very different and provided a unique experience, highlighting the benefits of mezze. Those who can’t share should look elsewhere in Arlington for their next meal.

Still, everything was not sunshine and daisies at this busy spot. The biggest disappointment was the East Coast Oysters we ordered. Shucked poorly with all of that briny oyster liquor gone, they felt dry and lifeless. I’m always a bit reticent to order oysters in a restaurant that simply labels them ‘east coast’ or ‘west coast,’ and these babies were a prime example why. Nothing else sank quite as low as these oysters, but there were still dishes I would pass over on a second visit, including the generally lackluster Cumin Yogurt Marinated Chicken Souvlaki and the Crispy Eggplant, which could have been lovely if the orange zest hadn’t overpowered the rest of the dish.

Though Kapnos Taverna has some kinks to work out, the vegetable mezze and cocktails were strong enough to encourage my return. I don’t visit Arlington often (my uncle either hates me, can only take so much of my awesomeness, or has a secret wife he doesn’t want me to meet), but I now look forward to going to the Kapnos in D.C., too. A must-visit for anyone who loves Greek food, Kapnos Taverna was a spot that provided diversity and fulfillment, and I can’t wait to see what else Mike Isabella comes up with as his empire grows.