The one thing I love about blogging about food is finally noticing how much it comes up in times that I’m not stuffing my face. Oftentimes, I come across other people’s opinions about food while reading, and I’m not just referring to the other blogs I follow. Pretty much every one out there has an opinion on food and it can show up everywhere from a random comic book to a collection cultivated to highlight the impact of food and drink on our lives. The latter is exactly what New Directions tried to do when they published On Booze in 2011. I picked it up full of wonder for two dollars in New York, knowing that F. Scott and booze went together like teenagers and tempers. However, as I waded my way through, I realized that the premise was a bit thin. A few sentences from here, a paragraph pulled from there, and you have a mismatched compilation of stories where you have to squint to see the Jazz Age and use a magnifying glass to see how it has anything to do with booze. Despite the poor execution, there were some gems trapped within the eighty-six pages. That’s what I bring you here, because while I love Fitzgerald, I’m not going to make any of you read this book. Go pick up Tender is the Night instead…after you read what I have to say, obviously. 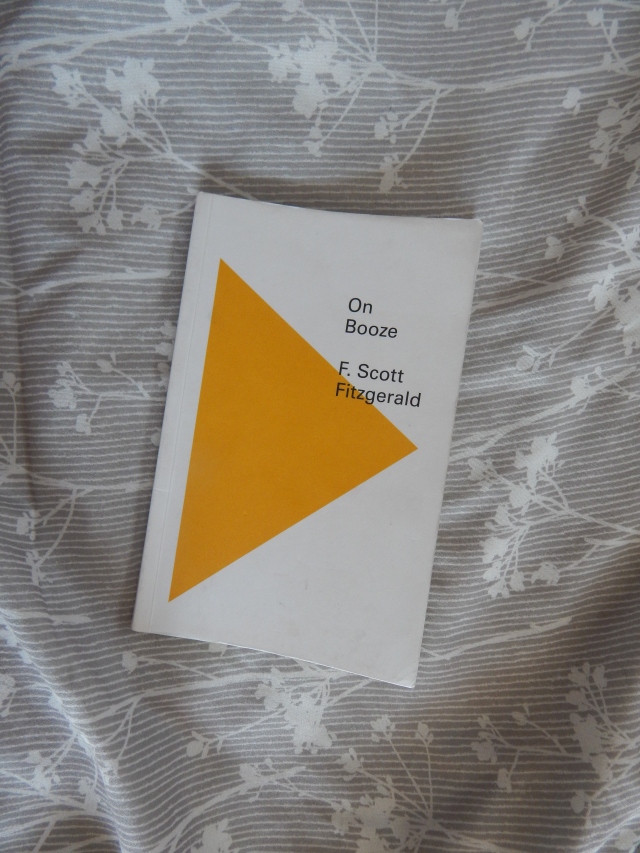 “Debut: the first time a young girl is seen drunk in public.”

“When he gets sober for six months and can’t stand any of the people he’s liked when drunk.”

“Many people who were not alcoholics were lit up four days out of seven…and the hangover became a part of the day as well allowed-for as the Spanish siesta.”

“…wasting the dinner hour in an argument about which hotel: there was one in Beaune where Ernest Hemingway had liked the trout. Finally we decided to drive all night, and we ate well in a stable courtyard facing a canal- the green-white glare of Provence had already began to dazzle us so that we didn’t care whether the food was good or not.”

“I turn in, perhaps with a night-cap…and read till drowsy on a last cigarette.”

“She drank the gin fizz thinking it was lemonade and ruined the luncheon table next day.”

And there you have it! I may not have loved this book, but I will say that good old Fitz has a way with words. Now, I’m off to read some more until I’m drowsy, though I will be sans cigarette.