It’s probably time for me to start subscribing to AARP The Magazine. As of two weeks ago, I am now twenty-three. With that comes maturity, knowledge, and the fear that in two years I will probably have to start lying about my age. Also, that I was able to pick any restaurant I wanted to for dinner with my friends. 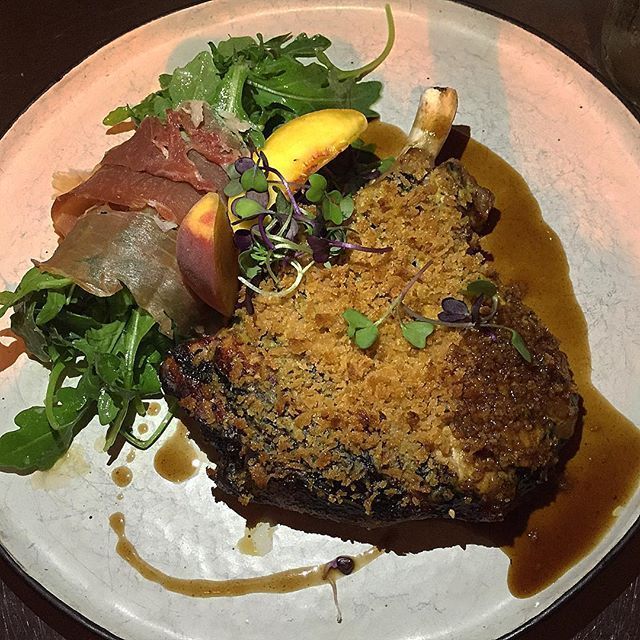 What I didn’t know was that my birthday also marked the beginning of Baltimore Restaurant Week. Two weeks before my birthday, I signed on to OpenTable to pull up available reservations at The Food Market, only to discover that my options fell before six or after eight-thirty. Saturdays are generally busy, and with Restaurant Week going on, it was doubly hard to find a reasonable dining hour that was still open for four people. Luckily with one click I was able to secure my 8:45 reservation and rack up some more OpenTable points, too.

Although I had all my ducks in a row before the evening began, it did start off a bit bumpy. Some things had nothing to do with the restaurant, like twisting my ankle on the way there. Others could have been prevented, like being seated twenty minutes after our reservation time. However, we had some drinks to keep us entertained while we waited around the bar.

Finally, we were taken to a table in the front window, which provided a slight respite from the noise. With an industrial look, the shiny silver surfaces were pleasing to the eye, but also amplified every sound in the place. It was okay for me and my group of twenty-somethings, but would be off-putting to anyone who wants to use an inside voice to hold a conversation. We quickly realized that the noise level hurts the waiters the most, as ours did everything but stick his ear up to our mouths to hear what we were saying. Once he discovered we were there for Restaurant Week, he seemed to shut down a bit, making the service even more impersonal. It never got better.

Though those downfalls were significant, the food fell on the opposite end of the spectrum. Wanting to celebrate the summer, I went for the Farm Fresh Tomatoes. Light and fun despite heavy ingredients like EVOO and goat’s cheese, this plate was all about layered simplicity. There was creaminess from the oil and cheese, acid from the tomatoes, and herbaceous from some chimichurri. It felt special, yet was still a dish I could easily eat every day.

After going for food that was delicate to start, I order substance with my second course. The Pork Chop was big enough for two and evidence that Baltimore’s Restaurant Week is still a deal. Textured on the outside, pink and juicy on the inside, the chop came out perfect and was enhanced by the additional elements on the plate. As the chef clearly understands, the only thing that makes pork better is more pork, especially when it comes in the form of prosciutto. To offset the big savory parts of the entree, fresh peaches and peppery arugula also came along for the ride. Bright and best appreciated when all aspects of the dish made it onto my lucky fork, it was good enough that I had to force myself to stop and take leftovers before I had to roll home.

As with any Restaurant Week menu, dessert ended the evening. Before that could happen, my table and the table next to us had to scream an off-key rendition of ‘Happy Birthday’ while I blew out a candle. I was mortified, but that was soon forgotten with my first bite of the Heath Bar Bread Pudding. It was warm, filling, and not too dense, so that all of our full bellies were able to relish in it. If it had been appropriate to do so, I would have just stuck my face right into this dessert and eaten it like that. It was the perfect ending to a meal that I would say highlighted elevated standards. All the food you loved as a kid, taken to the next level.

Even though The Food Market was not all gold, I would be willing to go back and give it another go. There was care put into these elegantly simple flavors, and with some tweaking on the front of the house, this restaurant could seamlessly fit in with my favorite spots around town. I hear people in Baltimore talk about The Food Market all the time; if given some time to grow, I wouldn’t be surprised if people all over started gushing.

6 Responses to Dinner at The Food Market (Baltimore, MD)